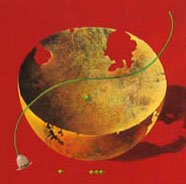 At the end of the road in Nyhamn on Northern Gotland there lived, untill the early 90s, an old man named Bror. He lived in chosen isolation on his old homestead. There were many stories about him. His only contact with the outside world was through the post ladies, who made sure he got in what he needed to survive. A few years after the world and Bror had said their mutual goodbyes, I went to his old place: a quiet territory of solitude.

That fortunate day, I found Bror’s rusted old water scoop on a pile of left behind trash. What was formed as a utensil and lived its ordinary life for many years, lay before me in metamorphosis, a dried-out shell, something once of the earth that the earth was now reclaiming. But not yet, I decided and removed the scoop from the old man’s garden to my own.

This scoop, so valuable to me, lives there to this day. Not under the stars but in my studio. I cherish the beauty in its design and all the constantly renewing thoughts and associations it provides.

It stays on my work-table and from time to time I touch it gently.  It might remain a metaphor for loneliness and emptiness but I do not let it simply be a fragile, rusty shell. Its shape is open, dark brown, and it seems to want the constant refill and embrace of light.

A symbol for human presence or a cosmic one; a semi-sphere; or the remains of a small planet surrounded by other tiny heavenly bodies: chestnut shell, beads as fallen stars, seashells and fossils. A faithful and passionate company.

What Bror would think, if he knew his discarded scoop had become a picture now seen across longitudes and latitudes, giving him a tiny presence in a world he rejected, we can only imagine.